In our Expert Takes, opinion leaders from inside and outside the crypto industry express their views, share their experience and give professional advice. Expert Takes cover everything from blockchain technology and ICO funding to taxation, regulation and cryptocurrency adoption by different sectors of the economy.

If you would like to contribute an Expert Take, please email your ideas and CV to george@cointelegraph.com.

Although the blockchain and crypto communities remain united around the ideology of blockchain and its world-changing potential, there is still one issue which proves to be as divisive as a hard fork — consensus protocols. Although proof-of-work (PoW) is still the protocol of choice for Bitcoin and many others, the debate rages over proof-of-stake (PoS), along with other emerging consensus protocols.

The granddaddy of consensus protocols and the brainchild of Satoshi, the proof-of-work protocol involves block miners solving complex cryptographic puzzles, for which they receive rewards in the form of coins or tokens.

As the original protocol, PoW has proven its resilience against internal and external attacks.

PoW comes under fire for several reasons. It is highly energy intensive, with some estimates putting the Bitcoin network power consumption at the same level as 159 countries. Critics of Bitcoin such as Andrew Tayo have pointed out that much of this energy is wasted, as only one miner can eventually mine each block, regardless how many participate in the race to get there first.

Bitcoin is now mostly mined using ASICs, so mining is dominated by big operations such as Bitmain, which can afford the hardware needed to mine at scale. This concentrates mining power into the hands of the few, leading some in the community to call Bitcoin a centralized currency. Although some crypto tokens such as Vertcoin attempt to remain ASIC-resistant by regularly changing algorithms, it is a race to stay ahead of the ASIC manufacturers.

Bitcoin, Litecoin, Zcash and Ethereum Classic, among others — PoW is still the most popular consensus protocol. 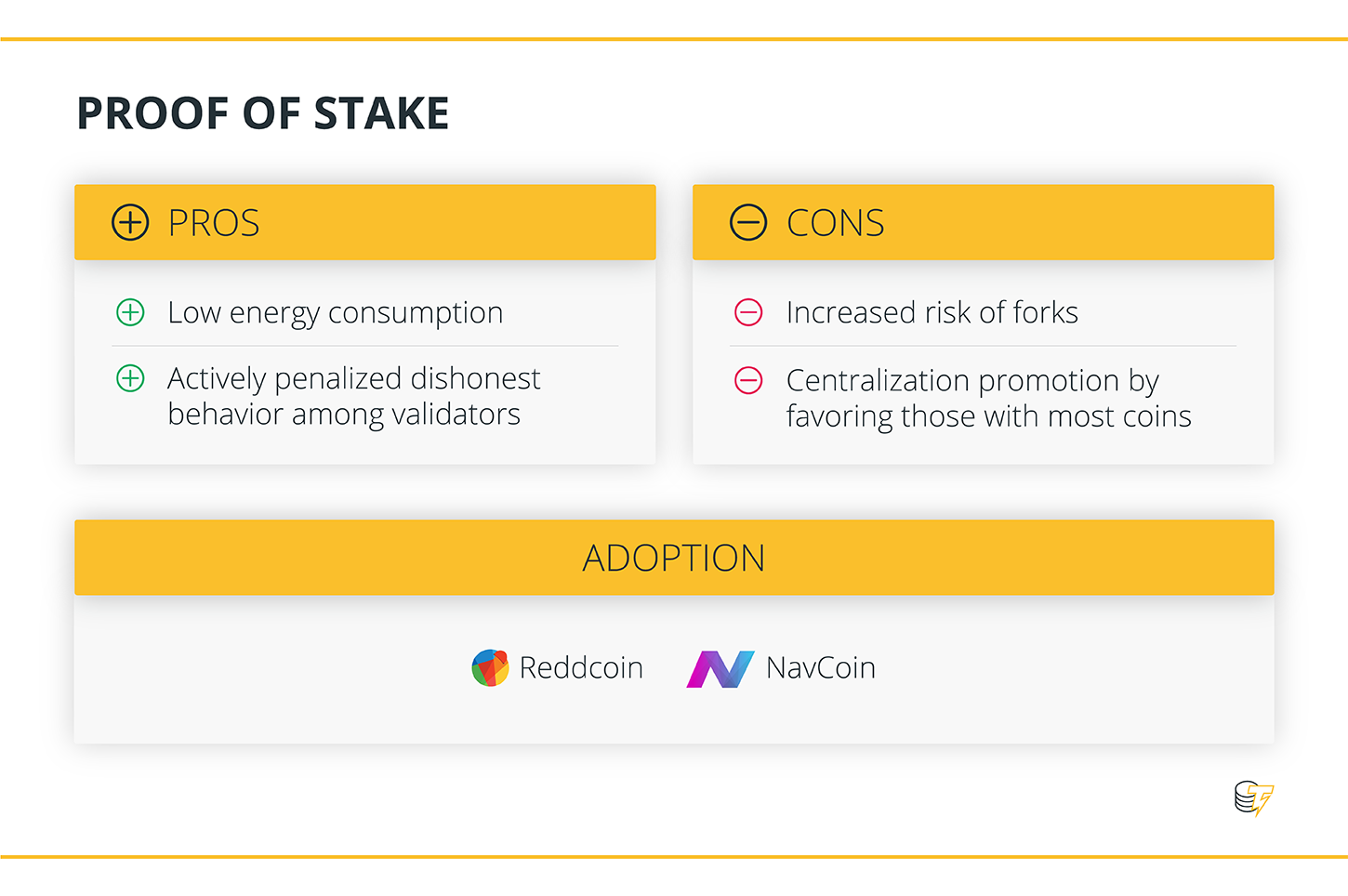 PoS was first conceived as a way of avoiding the well-known issues with PoW, such as energy consumption. In the PoS model, those holding coins can stake them on the likelihood of the next block being the correct one. If it is, they receive rewards. If someone stakes coins on a block that turns out to contain fraudulent transactions, they will be ‘fined’ the value of their stake.

As the validating nodes are not contributing computational power — known as the “nothing-at-stake” problem — there is an increased risk that PoS blockchains could see more forks than in PoW. Additionally, PoS favors those with the most coins, which also promotes centralization as the richer holders can stake more. For PoS coin NXT, it has been shown how one holder could steadily increase their stake to the point that they would own more than 90% of coins.

Projects using a pure PoS algorithm are Reddcoin, Decred and NavCoin. The problems with PoW algorithms are what has led Ethereum to move away from pure PoW and adopt Casper, a PoW/PoS hybrid.

Due to market domination by Bitcoin and Ethereum, the debate around consensus protocols often seems to center around PoW and PoS. In fact, they share similar problems, as indicated by Jordan Earls, co-founder and lead developer at Qtum:

“The real dichotomy in the discourse of mining algorithms seems to come from the whole centralization vs. decentralization debate rather than if one should choose PoS or PoW. ASIC resistance has proven to be as stated, only resistant. This aspect has helped to incentivize the centralization of mining, leading some PoW networks to periodically change their mining algorithm in order to defeat this. In PoS networks, the case is similar, where some networks choose consensus mechanisms that have a technological limit on the number of validators, in hopes to offer greater transaction throughput.”

However, we must remember that this is not a strict dichotomy — PoW and PoS are not the only consensus models. So what are some of the other options? 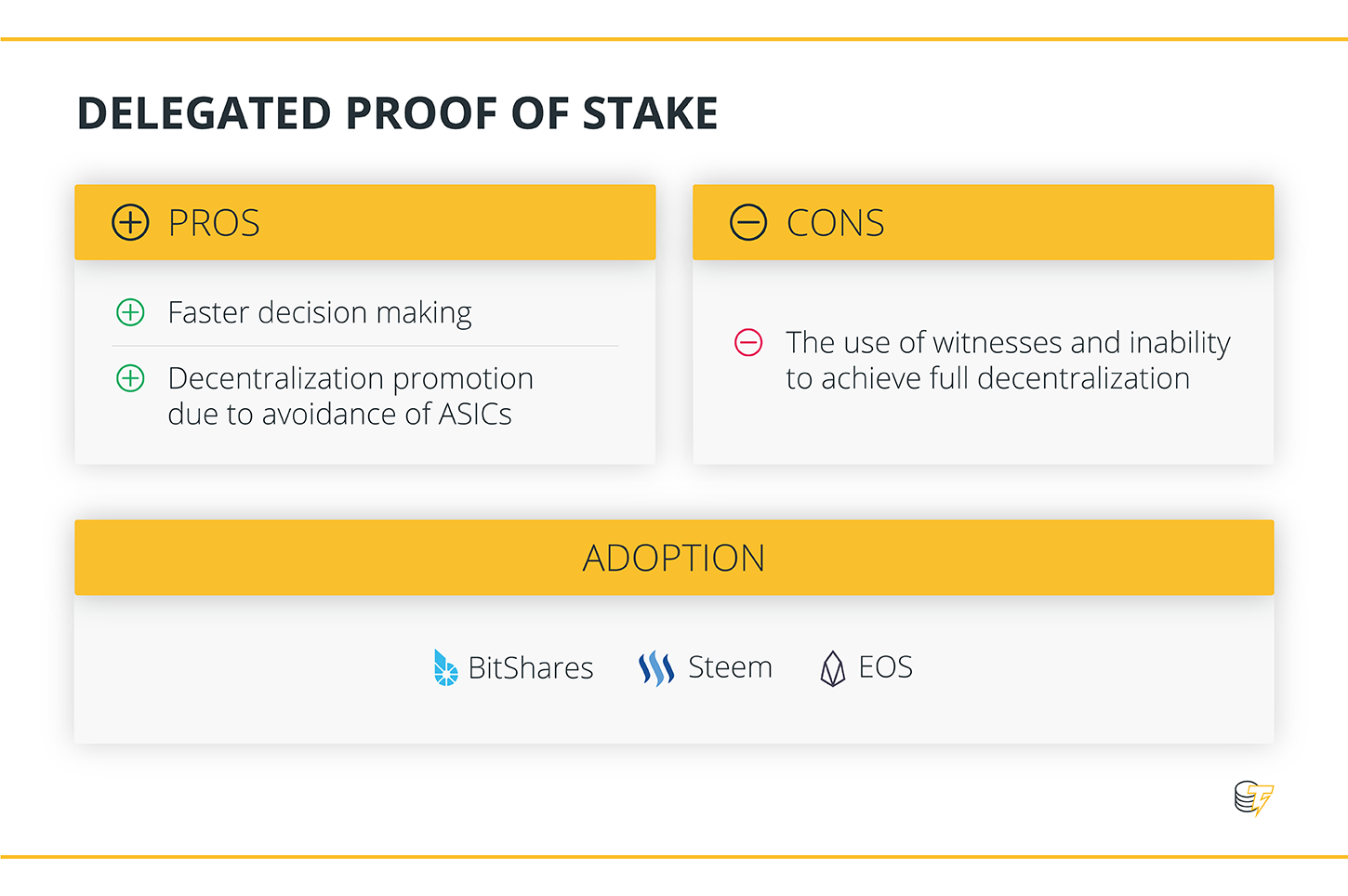 Delegated PoS was invented by Daniel Larimer, co-founder of Steem and CTO of EOS, which both use dPoS. Here, the network votes for ‘Witnesses,’ who reach the consensus to add the next block. Similar to the standard PoS model, the voting weight of network participants is determined by the number of network tokens they hold.

dPoS increases latency, as fewer parties to a consensus speeds up decision making. By avoiding the use of ASICs, it promotes decentralization — but with some caveats, as outlined below.

The use of ‘Witnesses’ means that full decentralization is never achieved. Consider the difference between a full democracy — all citizens voting on all matters — and a representative democracy, where delegates are elected to speak on behalf of the electorate.

Vitalik Buterin wrote a criticism of dPOS, describing how this consensus protocol can lead to plutocracy, with influential voters forming groups that could ultimately end in a malicious attack. Larimer responded in sharp defense with his own blog post titled “The Limits of Crypto-Economic Governance”:

“Vitalik is looking for a crypto-economic blackbox that assumes you cannot rely on voting whether by stake (plutocracy) or by individual (democracy).”

Larimer concluded with his view that consensus is the role of the network, and that “each community might have its own definition of ‘right and wrong,’ which can only be measured by a poll of the subjective opinions of community members.”

dPoS is used in all of Dan Larimer’s projects — namely BitShares, Steem and EOS. 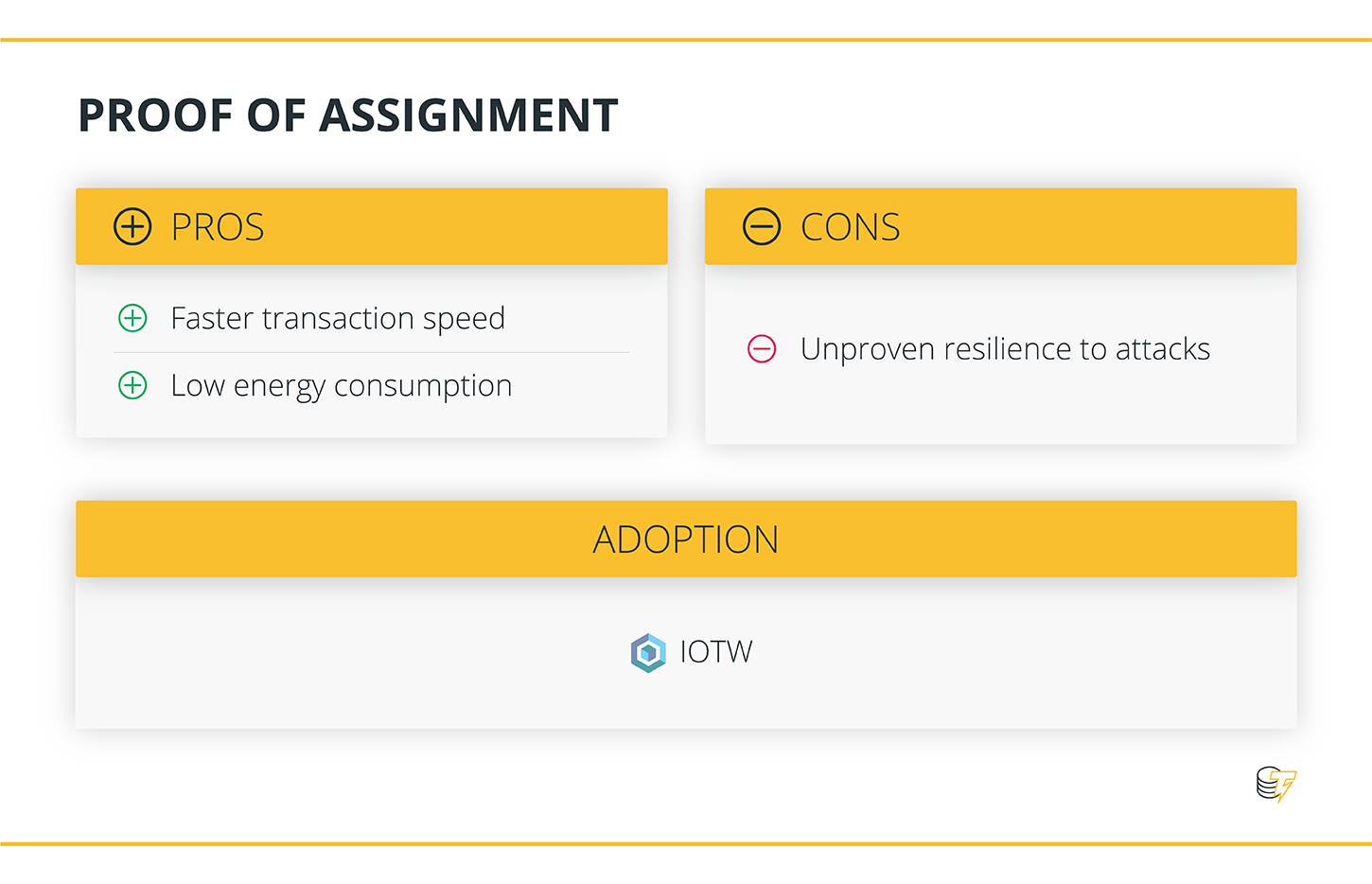 Similarly to dPoS, the proof-of-assignment model establishes several trusted nodes within the network, but only those nodes store the entire ledger. By allowing other network contributors to participate without ledger storage, the proof-of-assignment model allows any network-enabled device operating on the Internet of Things (IoT) to mine tokens. Called ‘micro-mining,’ this process enables internet-connected household appliances to contribute to the computing power of a blockchain network.

By harnessing the computing power of a vaster network of machines, PoA can handle faster transaction speeds with a much-reduced energy consumption.

PoA is still in its infancy and needs to prove its resilience through the early phases until network adoption gains traction.

Proof-of-assignment was developed by IOTW, a blockchain project aimed at bringing any internet-connected devices into the blockchain network. Fred Leung, founder and CEO of IOTW, explains:

“The end goal here, in order to create mass blockchain adoption, is to bring blockchain into every household. PoA and micro-mining will allow any connected device to mine without adding hardware cost. Common people will get the blockchain rewards and so they will learn about blockchain and cryptocurrency. PoA uses very little power, since it does not need to compute proof-of-work. Micro-mining, with witnessing protocol, will allow [a] significant less number of ledgers with the same number [of] verification nodes.” 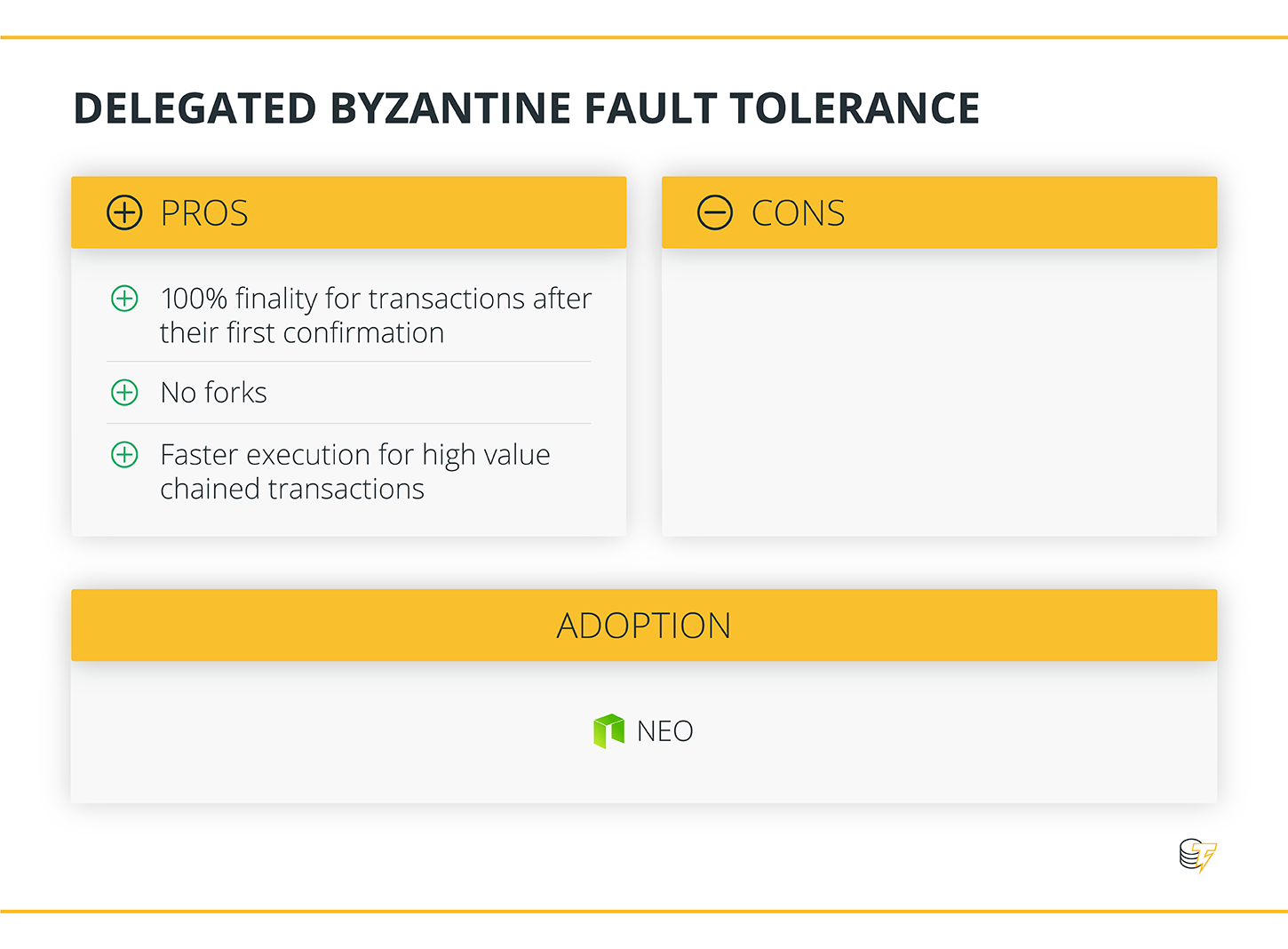 Delegated Byzantine Fault Tolerance was developed by the NEO team to overcome the Byzantine Generals Problem. The system is comprised of nodes, delegates (who can approve the blocks), and a speaker (who proposes the next block). Various scenarios illustrate how the dBFT protocol is robust enough to protect against malicious actors within the network.

Malcolm Lerider, senior R&D manager at NEO had this to say about the dBFT protocol:

“dBFT is invented by NEO [previously called Antshares] and has proved to work well. It is a consensus algorithm developed with perfect finality, meaning that all transactions are 100 percent final after the first confirmation. The blockchain cannot fork with dBFT, and high-value chained transactions are trivial and executed much faster. It is built with regulatory and business use cases in mind.”

Vitalik makes the point that 100 percent finality is always probabilistic, at least philosophically. However, the NEO blockchain has yet to suffer any transaction reversal that contradicts its claim that its algorithm offers perfect finality.

dBFT is used by NEO.

Blockchain, as a technology, is still very much under development. It is, therefore, a natural consequence that the issue of the ‘right’ consensus protocol is still under debate. Many of the critical considerations — such as the extent of decentralization — go to the core of the spirit of blockchain as a technology. At least for now, there is no consensus on the right consensus protocol.

Nikolai is a financial analyst and professional trader writing for Forbes, The Next Web and Investing.com. Based in Israel, he has been trading multiple markets and educating traders as a teacher and a mentor. Nikolai has extensive experience in stock market analysis, investment research and various assets such as cryptocurrencies, FX, commodities, equities and bonds.

August 22, 2021 superadmin
[ad_1] At the start of 2021, the cryptocurrency industry was bursting with news of increased institutional investment, and this is
ANALYSIS

Januar 24, 2022 superadmin
[ad_1] Nonfungible tokens (NFT) may be disrupting the trillion-dollar fashion industry, but NFTs are just one piece of a much