Before the Ether could rise by a whopping 19 percent on September 13, the Ethereum price had to cope with a sharp fall in prices. Part of the community is held responsible by the BitMEX exchange. What is behind these allegations?

So far, there was the general market situation, the Difficulty Bomb and self-critical statements by Vitalik Buterin as possible reasons. Now BitMEX ranks as a market manipulator in the row of suspects. This is not the first manipulation accusation against the crypto exchange.

One thing’s for sure: Arthur Hayes, the CEO of BitMEX, is not a follower of Ethereum. In mid-August, he described Ethereum as a Shitcoin, whose course would soon be double digits. Even more directly he expressed himself in the BitMEX-own trollbox: 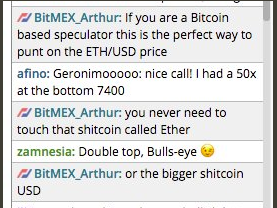 In this dialogue you can see the explosiveness of his opinion. It’s not just about an attitude to Ethereum, which could also be classified as a matter of taste. Arthur Hayes says that so-called ETH / USD Perpetual Swaps can manipulate Ethereum’s course without using Ethereum.

Short positions, that is, betting on a falling course, can not only be used by traders for speculative purposes. A long-term investor can also hedge the value of his or her actual investment through a short position. While this will cost the long-term investor every eight hours, he can minimize the loss in the event of a price drop, with intelligently selected leverage.

Perpetual swaps for Ethereum are worthless for hedging

Such perpetual swaps, even if they are listed under ETH / USD, are based on the rate of exchange between Ethereum and Bitcoin. Neither Long nor Short Positions requires you to buy Ether. Traders on BitMex actually only bet on one index. More importantly, only the rate of exchange between Bitcoin and Ethereum, which is irrelevant between Ethereum and the US dollar, also counts for the calculation of the ETH / USD exchange rate. Conversely, this also means that the value calculated for Ethereum depends not only on the fluctuations within the Ethereum rate but also on the Bitcoin rate.

This double dependency makes the Perpetual Swap ETH / USD useless as a hedging instrument. Shorting is therefore only useful for speculators and other interested in falling prices.

In August, it was noticeable that the purchase prices for ETH / USD swaps were significantly higher than the index for Ethereum. Presumably, after the introduction of these perpetual swaps, some traders have opened long positions thinking that Ethereum is currently undervalued. Real opposing positions that build a hedge, you did not see.

The result was a huge gap between buy and sell positions. The fees for long positions exceeded 50 percent per annum. The positions could no longer be maintained. At some point, whales have probably entered the market and opened up extremely cheap short positions – causing the price to fall.

How realistic is the BitMEX thesis?

As far as the abnormalities are worth mentioning. Arthur Hayes’ position towards Ethereum is also known. That traders have used the depicted mechanisms of perpetual swaps against ethereum is undoubtedly a possibility. However, the impact of the Ethereum course on BitMEX on other courses is merely a psychological one. Because traders on the Exchange BitMEX buy and sell so-called quanto derivatives, which are tied to the ethereum price, not individual ether tokens.

Such a psychological influence should not be underestimated, especially if it coincides with a generally pessimistic market situation, various criticisms of Ethereum and another shift in Difficulty Bomb. BitMEX may have contributed to an overall picture, but certainly not alone have influenced the course.

source and image by BTC-Echo

Dezember 18, 2021 superadmin
[ad_1] Advertisment The craze of AXIE and RACA announced that the Gamefi craze around the concept of meta-universe has arrived.
Bitcoin News

November 27, 2021 superadmin
[ad_1] Advertisment CryptoCat (CCAT) has now been added to WhiteBIT’s trading platform. CryptoCat is the Global Leader and Innovator with

How to pick or analyze altcoins?